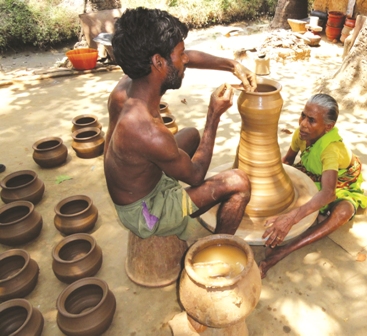 Pottery is a Profitable Business for Amour Artisans

With the revolution in information technology the whole world has become a global village. People have their reach to every corner of the world. It has threatened the existence of the natural existence of the rural people. Scientific inventions have made some people jobless too. India has been badly affected by it. The potters used to make earthen utensils. But in the modern time they too have almost lost their jobs. Thanks for Self Help Groups promoted by SEVAI and the members are abled to retain their pottery jobs even to-day. In the summer season everyone likes to drink cold water.

The earthen wares were being used to cool the water for centuries. The practice of keeping water in pitchers has almost disappeared in cities and in some of the villages people still use the earthen utensils in their daily life. It is believed that the water, chilled in the pitters, is always good for the health. Pottery is considered as small business with less investment and it is considered as house hold activity for income generation.
Small businesses create most of the jobs in rural India. Since the ‘Great Recession’ began in December 2007, several hundreds of people are involved in small business in the so called computer world and Pottery has its renewal in rural Amour village near Trichy of Tamilnadu. Pottery is a profitable business for Amour artisans and it is a form of rural technology, where wet clays are shaped and dried, then fired to harden them and make them waterproof.

The terms “pottery,” “earthenware” is generally used only for relatively easily constructed utensils such as pots, cups, bowls, etc., and for some decorative items. Pottery is both an ancient and modern technology, in that it uses materials and techniques that are thousands of years old but also takes advantage of more modern innovations. A person who makes pottery is generally known as a potter.

The potter’s most basic tool is the potter’s wheel. There are basic categories of forming techniques used in pottery – handwork and wheelwork. It’s very common for wheel worked pieces to be finished by handwork techniques. Handwork methods are the most primitive and individual techniques,. No two pieces of handwork will be exactly the same, so it is not suitable for making precisely matched sets of items. Doing handwork enables the potter to use their imagination to create one-of-a-kind works of art.

The potter’s wheel can be used for mass production, although often it is employed to make individual pieces. A ball of clay is placed in the center of a turntable, called the wheel head, which is turned chiefly using foot power (a kick wheel or treadle wheel). Oftentimes a disk of, wood is affixed to the wheel head and the ball of clay attached to the disk rather than the wheel head so as to facilitate easy removal of the finished piece. This disk is referred to as a bat.

The wheel revolves rapidly while the clay is pressed, squeezed and pulled gently into shape. The process of pressuring the clay into a radial symmetry, so that it does not move from side to side as the wheel head rotates is referred to as “centering” the clay – usually the most difficult skill to master for beginning potters.
Wheel work takes a lot of technical ability, but a skilled potter can produce many virtually identical plates, vases or bowls in a day. Because of its nature, wheel work can only be used to initially create items with radial symmetry on a vertical axis. These pieces can then be altered by impressing, bulging, carving, fluting, faceting, incising, and other methods to make them more visually interesting.

Often, thrown pieces are further modified by having handles, lids, feet, spouts, and other functional aspects added using the techniques of handworking. Pottery that is thrown on the wheel is often finished in a process known as trimming. The thrown piece is first allowed to dry to the leather-hard state then it is returned to the potter’s wheel, usually with the rim down.

The piece must be re-centered to allow trimming of the foot of the pot to create a smooth and well-defined surface. There are two related techniques that improve repeatability of wheelwork. A jigger is a mould that is slowly brought down onto the outside of an object, whilst it is being turned on a wheel. A solid mould is used to form the inside of the piece. Similarly, a Wood firing is a type of firing which involves using wood, rather than gas or electricity as in most modern kilns, to heat the kiln’s interior.

It is frequently time-consuming, as the kiln must be stoked for as long as a few days, but the pieces which emerge often have characteristic patches of orange color on the clay itself, known as “blushing”. Production stages are all pottery items go through a series of stages during construction, the raw clay is wedged to make its moisture and other particle distribution homogeneous and to remove air bubbles.

It is then shaped either by hand or using tools such as a potter’s wheel, an extruder, or a slab roller. Water is used to keep the clay flexible during construction and to keep it from cracking. Work that is thrown on the wheel often needs to be trimmed or turned to make its thickness uniform and/or to form a foot on the piece.
This process is done when the piece has stiffened enough to survive manipulation. This condition is called leather hard. The piece is allowed to air dry until it is hard and dry to the touch. The greenware is often given a preliminary lower range firing in a kiln. Once it has been fired, the clay is known as ‘biscuit’ ware or bisque.
This is decorated with glaze and then fired again to a higher temperature. Some pieces are not bisque-fired before being glazed. These pieces are called once-fired. Pottery as a business is classified as an industry based on its purpose. There are a variety of ways people make money from potting. Some sell their product locally, at trade shows and weekly markets. Others sell original patterns or kits they have designed themselves.

The potters of Amour have not lost their interest in their ancestral occupation and even take a lot of interest in it. There are significant numbers of people who still make pottery items. The occupation of making earthen vessels is once more gaining. In older times they used to get clay and dung very easily.

Clay is used for making vessels while dung is used to bake them. But now investment costs have increased a lot. The clay is brought from the some faraway places and then they have to transport their products. The Self Help groups of Amour area both men and women are renewing their business and earn around Rs.150 per day and it works as the household income generation activity for families of Self help group members and it is important that the youth should also learn the skills with value added process. They get around 30 per cent profit from their productions. The rural sector people still prefer the pitchers. In rural sector people get the electricity supply has become a problem and in such conditions the refrigerators and water coolers have become useless boxes. It is good that Self Help Groups are able to keep their ‘centuries old’ occupation alive and this occupation should not disappear.